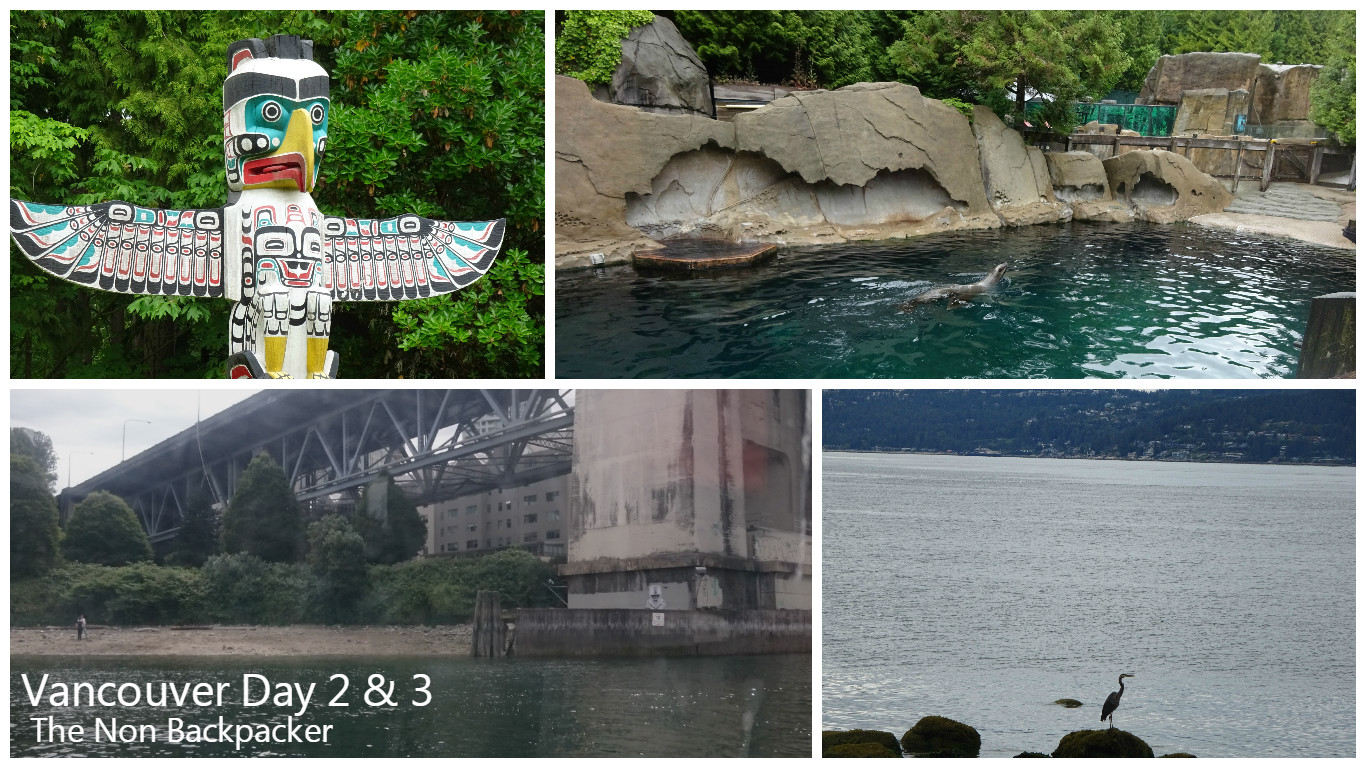 Our second full day in Vancouver started with french toast and strawberries which was well needed as we had a day of cycling ahead of us! 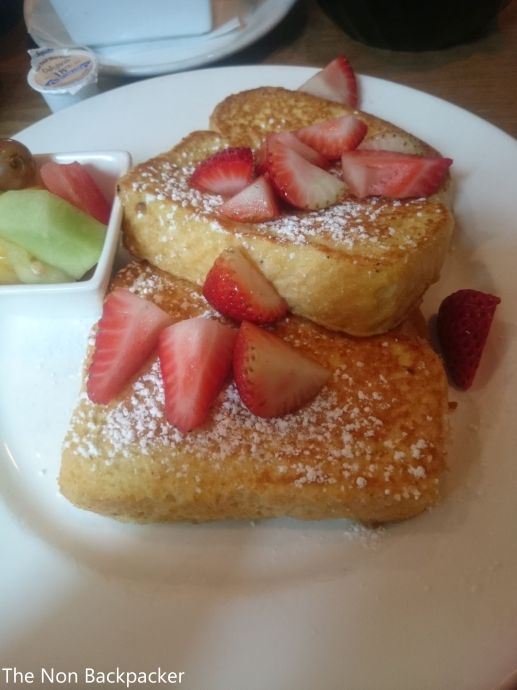 One of the things I wanted to do the most when visiting Vancouver was cycle the seawall around Stanley park. Not only is Stanley park one of the most iconic things to do you can’t really beat a seawall especially when it has a wonderful cycle path.

After we picked up our bikes from English Bay bike rentals (would highly recommend, good pricing and good range of bikes) we headed along the beach and into the park. English Bay is a lovely area of Vancouver and I could see myself living there if I ever found myself in that area of the world.

Stanley Park is a historic natural wonder in the middle of the city backed by the sea and right in the middle is Vancouver Aquarium. It wasn’t too busy when we got there but we decided to buy our tickets at the self service machines outside so we could skip the queue and head straight in. The Aquarium is HUGE! Top to bottom filled with wonderful displays and interactive areas about all the fish and animals. I would say it’s more of an aquatic zoo, with beluga whales, dolphins, frogs and penguins to name a few! 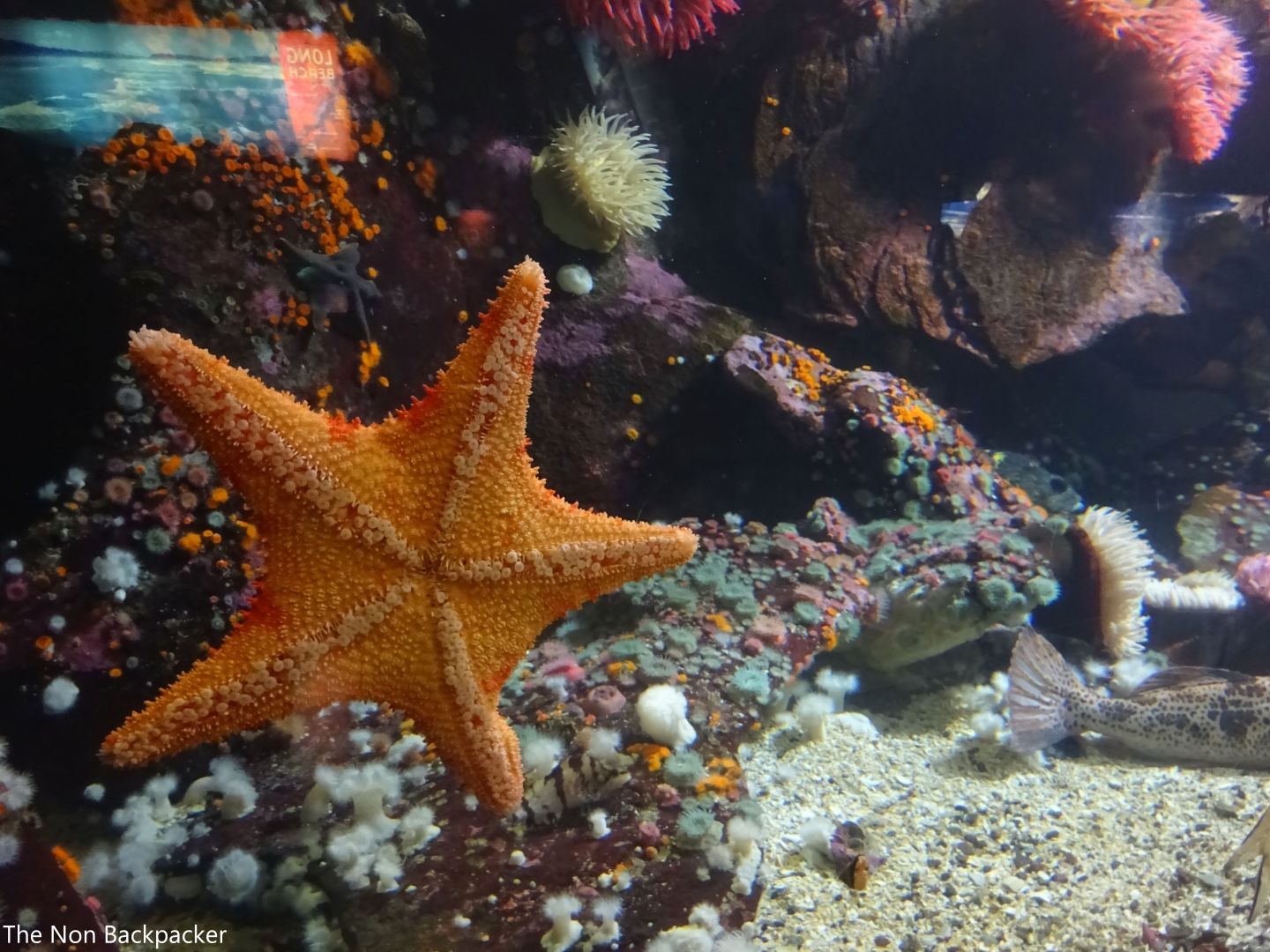 We spent a good few hours exploring all the exhibits and having a quick lunch before heading back out on the bikes to explore the rest of the park. I would HIGHLY recommend visiting this attraction, its aim is conservation and education and really is a lovely day out!

We stopped at the famous totem poles, one of British Columbia’s most visited attractions to take some pictures and soak up the atmosphere. It was fairly busy but we still managed to get a good view. There are nine poles and the collection began in the 1920’s and today represents the respect for the native people of Canada. 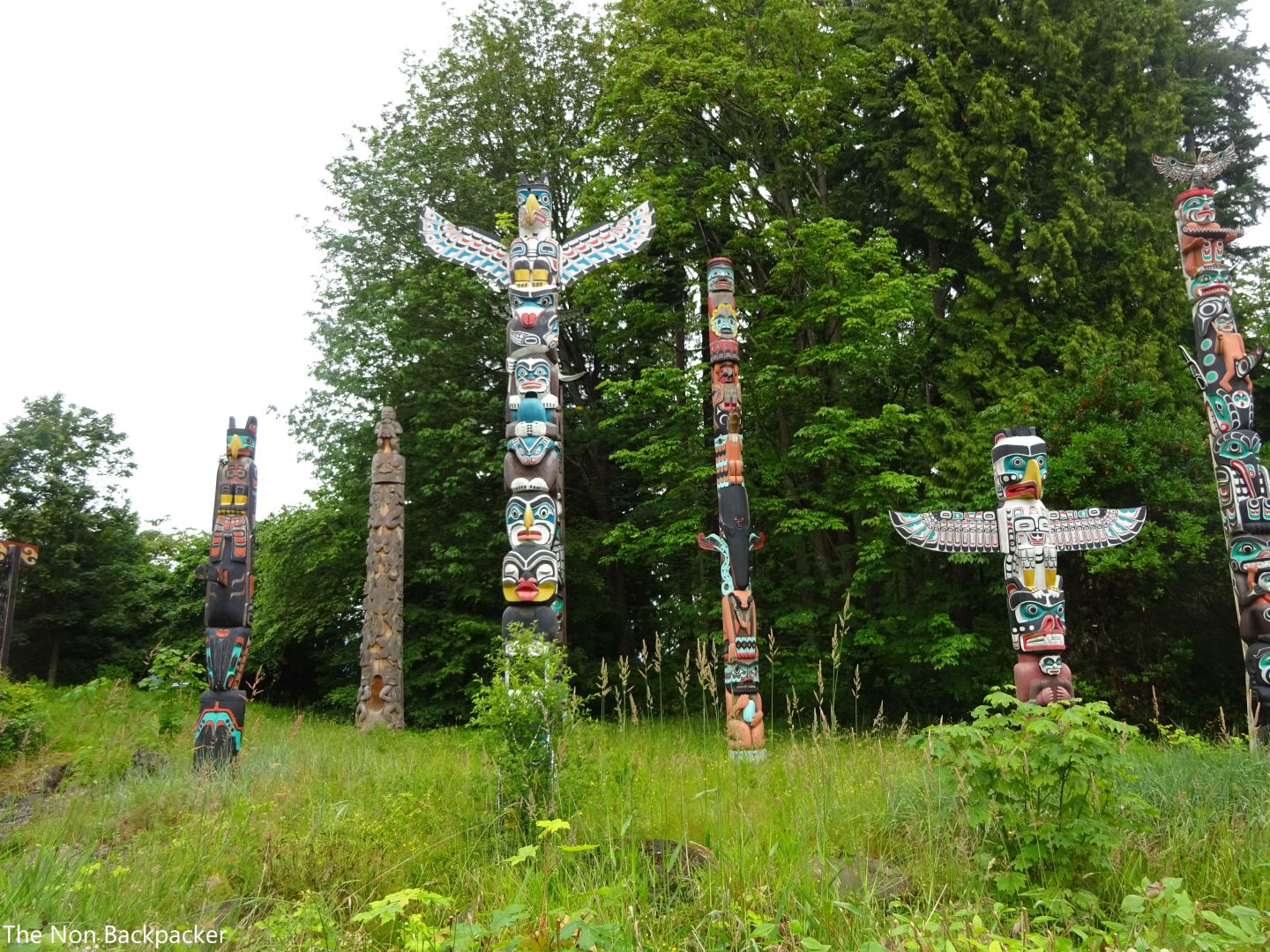 We continued round the wall stopping along the way, looking out into the harbour and the ocean beyond. It was quite humbling to be stood there looking out into the unknown. I always try and find a piece of a trip to take home, there were many on this trip but this was a favourite one. 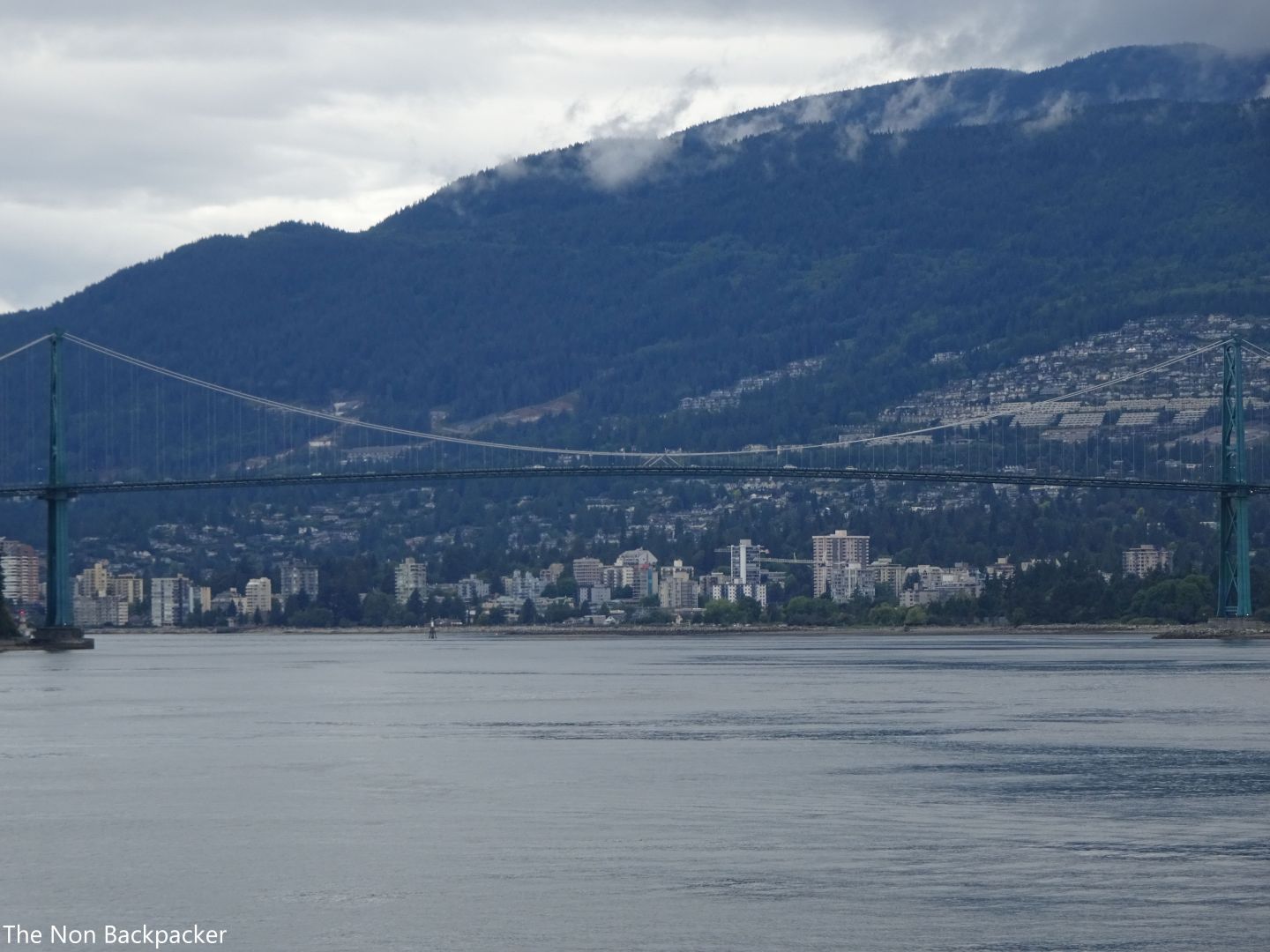 Spending as much time with each other as we do can put a strain on some relationships but I would say it makes our stronger and I wouldn’t change it. Travelling to new unknown places humbles you much like a relationship does.

Exhaustion was beginning to set it after a massively action packed holiday so we took it easy for the evening in preparation for our last day in the beautiful country that is Canada. Obviously that preparation was cocktails and an evening walk! 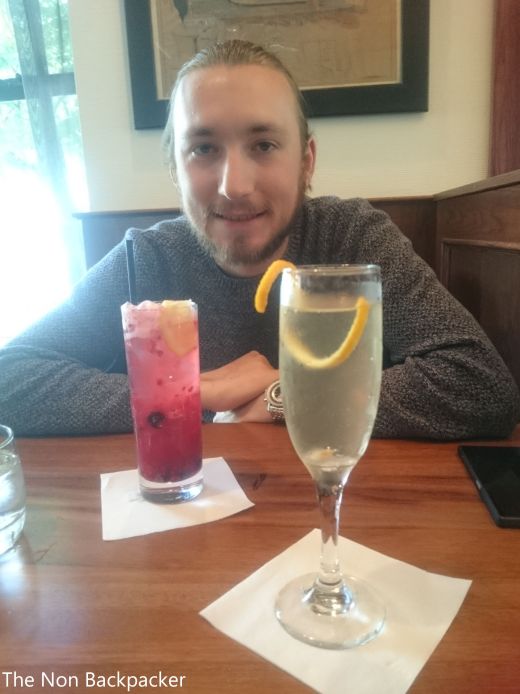 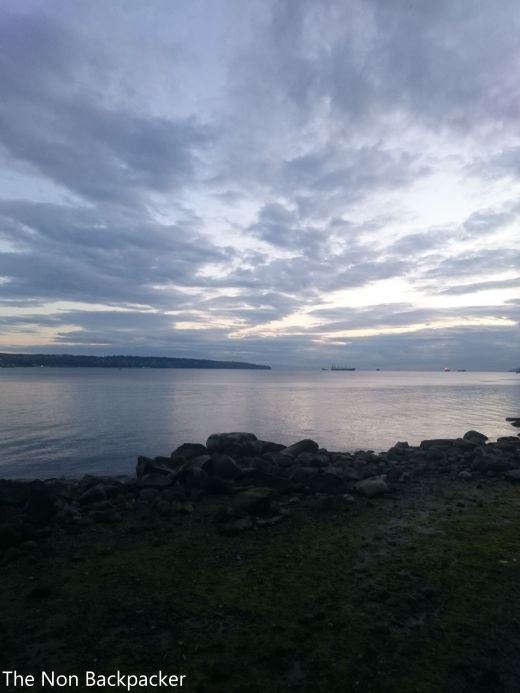 Our last day in Vancouver was made up of a trip over to Granville Island which is another must do in Vancouver. We spent some of the morning packing and checking out, as our flight wasn’t until the evening we had time to enjoy this unique island.

To start with you catch a water taxi to it which is unique and cute in itself! Once you’re there it’s filled with independent shops and a huge indoor market. We wandered for a couple of hours taking in the sights and doing a bit of shopping. Sometimes it’s nice to just chill!!

We did however stop at the Granville Brewing Company for a tour of their small onsite brewery and some tasters of their craft ale. Ale is becoming big over the pond and craft breweries are popping up all over the place. A revelation in my life was a raspberry beer that company door, which annoyingly isn’t available this side of the pond nor was it in the airport!

After we had drunk the tasters (plus some more with lunch) we ambled back to the hotel for our taxi to the airport. 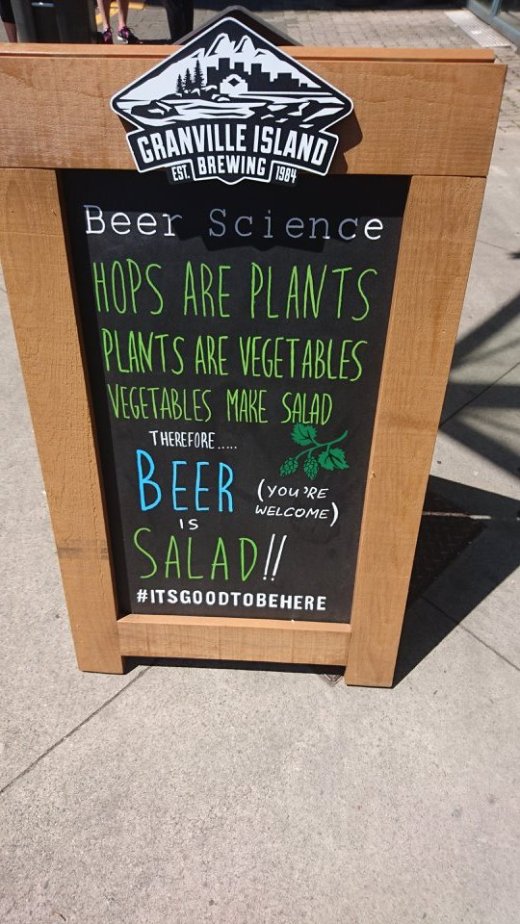 A wonderful 14 days in a wonderful country. I would recommend to anyone. The east coast of Canada has everything you could want for any sort of person. I hope that I get to return again if not just to breathe the wonderful air and soak in the views of those incredible mountains!

That’s a wrap for Canada! VERY late and perhaps a little brief towards the end but we it reflects the slowing down. Our next adventure took place a few months later in an equally stunning landscape….ICELAND!